Posted by Heidi on June 27, 2020
Olive oil soap takes a really long time to trace. Sometimes you start to wonder if it is going to happen at all. The trace is the point where a stable emulsion has emerged, and the soap has started to thicken. Higher temperatures speed up the process and you reach trace sooner.
We did a batch of soap in which we used 94% olive oil. Just to show how the process looks like, I took a video while Suvi was mixing the batter. Even though the NaOH solution was boiling hot when we added it to the oils it took nearly 5 minutes to reach light trace.
In this recipe we used: 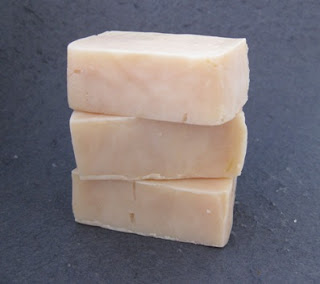 A few days ago I found from my stash this soap that I had made some months ago. It is a soap in which I had just dumped all the remaining oils I had that time so I did not expect very much of it. However, I was extremely amazed how good the soap was! So lovely for my winter dry skin. The thing different from my regular soap recipe was that this one had rapeseed oil in it. I had abandoned rapeseed oil earlier since it has been said to be prone to spoilage because of the high amount of linoleic and linolenic fatty acids. That has never happened to me, but I just wanted to be on the safe side. After trying this soap I started to look more closely into the issue and found out that there are so many good things regarding rapeseed oil that I am now considering taking it back as one of my soaping oils. Firstly, rapeseed is one of the rare plants that is grown in Finland for vegetable oil production and thus one of the rare oils that I am able to source locally. It is also very beneficial 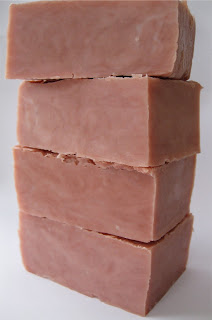 What would be more wonderful than a handcrafted  pink clay soap? The oils used in this recipe are beneficial for sensitive, dry and prematurely aged skin. The bar contains rejuvenating moisturizing oils and the pink argiletz clay leaves a silky feeling on the skin. Recipe: 350g Apricot Kernel Oil 250g Shea Butter 150g Cocoa Butter 150g Coconut Oil 100g Castor Oil 2tblsp Rose Argiletz Clay 10g Paradise FO by Gracefruit 130g NaOH 275ml water Method: Oven hot process temp. 110C for 90 minutes You might want to increase the amount of water up to 375ml. I am not sure why, but the soap almost came out of the pot a couple of times in the oven. I usually check the soap every 15 minutes when it is the oven. This time I really didn't see the soap gel and it was hard to say if it was ready or not. Adding a little more water in the recipe might solve this problem. Anyway, that's why I ended up keeping it in the oven for 90 minutes. The next day the pH of this batch was 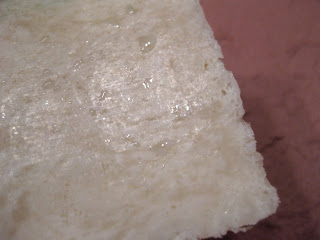 IT'S IN THE RECIPE: THE CASE OF A SWEATING SALT SOAP

Wow, it's first time that it has happened to me! The salt soap is sweating! I have made salts soaps in summer and winter, humid and dry weather but never had sweat on salt soap. I believe that the only explanation is the recipe since this one is totally different from what I have done before. In my salt soap recipes there is usually a very large percentage of coconut oil and then some butter. The lowest that I have gone is in the Summer Spa where I used 50% coconut. This recipe has 30% coconut oil and 70% rapeseed oil with 5% superfat. It is a test batch I made with my sister Suvi to experiment how different percentages of sea salt affect the soap qualities (I'll let you know about the results once we have thorougly tested the soaps). Patience is not one of my virtues, so we used oven hot process to be able to test the soap sooner. After the soap came out from oven, we divided it in four parts and added different amounts of sea salt in each. The one with no sea salt di